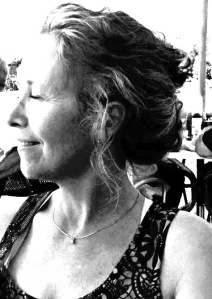 Lately, my sons have refused invitations or eagerly accepted them but then not followed through, while simultaneously (along with their father) they make increasingly unconscious demands on my time and energy; so that yesterday, I found myself walking to the pond, feeling sorry for myself, absent of the sweet company I so desired/deserved; and these thoughts continued with me down the road, across the brook, up the hill and down the path through the woods to the water’s grassy edge, where they slipped away with asana under the morning sun, until I found myself supine on the dock in a gentle spinal twist, looking up at the needles of a tall pine with whom I’ve communed for so many years–through so many seasons of my life–and hers–ice storms and snow storms and early springs and fair autumns (skipping high summer when the campers are here)–And in that moment I felt the steady friendship of her branches extended toward me and the strength of her deep roots sustaining our connection, and I realized how I would never be alone, not really, even when both boys are gone; and I thought about how often men forsake not only the women in their lives, but the earth, and how that brings women and the earth closer together, and aren’t we better for it; and then, something else:

Don’t I forsake Her too… 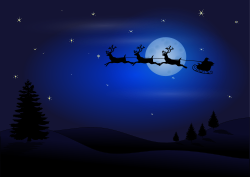 When I look back on my childhood, I see that my unfolding understanding of Santa was seamless.  At first–a person, and later– a spirit, “Santa” always embodied the magic of abundance and possibility and good will.

I have to give credit to my mother.  She simply would not entertain any conversation around the “realness” of Santa.  It was a given that one “believed” if one wanted presents under the tree.  Born on Christmas Day, she was the one to hold the flame of faith and pass it down through her eight children.

When I was 17, I was given the honor of becoming Santa’s helper. My high school sweetheart and I were up till 2 Christmas Eve putting together my little sister’s Barbie Dream House–with four floors and an elevator.

At 18, I asked for my father’s credit card and spent a day at the mall playing “Santa” for my mother so that the tree would bless her with abundance too.

As a young adult, the Christmas season delighted me still–though the “magic” sometimes waited till after the big day to reveal itself–usually in the quiet evenings as I lie on the couch steeping in the glow of the evergreen.

As a new parent, I could hardly fall to sleep on Christmas Eve, and it was I who was up before dawn, waiting for my sons to head down to the tree.

My oldest is now 14 and he’s never asked me if Santa was real.  I guess that’s because he sees the spirit alive in me.

However, on par with the course of adolescent development, he resists the timeless rituals that have been a part of our holiday season, particularly the nightly reading of our December Treasury book.

But hearing him read the words,”Quaint arabesques in argent, flat and cold,” recited from December 4th’s poem, Frost Work, reveals the deep meaning the traditions hold in him.

In an revelatory moment, his younger brother turns to him on the couch and asks,

Do you believe in Santa?

There is a collective breath-holding before he responds in typical teen fashion,

“Sure means ‘No,” my 9 year old proclaims, testing his brother’s metal.

All eyes turn to my oldest to see how he’ll navigate this sudden test of faith.  t first he falters with a luke-warm response and a half-hearted laugh,

And I gasp. I want to alert him to the fragile significance of this moment, but just in case, I resort to this:

You remember what happened to Alonzo’s big brother in the Little House in the Prairie, don’t you:  He told his little brother that there wasn’t a Santa–and he didn’t get ANY presents that year because he didn’t believe.

My teen turns from me to his younger brother and back again, measuring his independence from belonging; Then shakes his head and says in earnest,

Of course, I believe.

There is a collective exhale as we turn back to the night’s Christmas reading with greater meaning.

I never feel the necessity of telling my children “the truth” about whether or not Santa is “real.”  For me Santa transcends the stories that surround him throughout time and culture.

As my children grow older, I begin, like my mother did, to talk about the enduring qualities of Christmas.

And when all else fails, I turn to the classic, Yes, Virginia There is  a Santa Claus whose text I can not read without tears~

Virginia, your little friends are wrong.  They have been affected by the skepticism of a skeptical age.  They do not believe except what they see…

YES, VIRGINIA, there is a Santa Claus.  He exists as certainly as love and generosity and devotion exist, and you know that they abound and give your life its highest beauty…

The most real things in the world are those that neither children nor men can see…You tear apart a baby’s rattle and see what makes the noise inside, but there is a veil covering the unseen world which not the strongest men, nor the strength of all the strongest men that ever lived, could tear apart.

Only faith, fancy, poetry, love, romance can push aside that curtain and view… the supernal beauty and glory beyond.

Is it all real?  Ah…in this world there is nothing else real and abiding…

NO SANTA CLAUS!  Thank God he lives, and lives forever. A thousand years from now…nay ten times ten thousand years… he will continue to make glad the heart of childhood.

…And the heart of grownups like us who still believe!

48 hours after I post my piece on Sex and the family, my son comes home from a friend’s house to say,

“Mom are you blogging about sex and me?”

I gulp and buy myself some time with a counter accusation, “Are you reading my blogs?”

He wasn’t, but he was sleeping over his friend’s house, and his friend’s mother was reading my blog, and she asked, “How do you feel about your mom writing about you and sex?”

Geez! Is it me or did this mom cross the line?  🙂 I know my blog is public, and it’s only a matter of time before everything I write gets around town, but I thought a fellow mom would have my back.

Maybe it was his back she had.

“I told her that I don’t read what you write.  I get less upset that way.,” he says.

“The post got a lot of hits,” I tell him, hoping to soften the blow.  (He loves anything to do with numbers.) “I could change your name,” I add, but he just shakes his head and heads up to his room.

Later that day, we enforce a family walk along the Connecticut.  It’s an exquisite fall afternoon, with a bright sun and sweatshirt-friendly air. Within moments of crunching down the river path, my teen starts to ask how far we plan to walk.

“Look at the leaves,” I suggest.  “There are so many shapes and colors.  Smell them!” He’s not interested– until I suggest a competition.  I give everyone three minutes and a square foot of earth.

There’s controversy over who wins because of different varieties of the same species, but in the end he skillfully identifies: beech, ash, three different maples and four different oaks.

I smile without letting him see, realizing that he still has his deep connection to the woods, even if he prefers his I Pod and X Box at this stage of the game.

After this magical moment, the walk degenerates into an acorn chucking fight between the boys.  Within moments, my nine-year old is whining and my husband and I are yelling. I bring up the Sex post again just to shift the dynamic.

“Okay,” I say.  “I’ll tell them that you’ve been able to date since you were six– that you’re even allowed to get married right now if you want.”

“Just don’t say anything, Mom,” he says, without cracking a smile at my great sense of humor.

Surprisingly, he gives me his approval, as he chucks another acorn at his little brother.

“It was just a little egg-corn,” he says, still mispronouncing it the way he did as a little boy.

Families with kids in strollers go by.  Almost everybody on the path has a dog.  “Are we weird because we don’t have a dog?” I ask.

“You’re supposed to think we’re weird,” I say in defense.  “How else will you leave us?”

By the time we get back into our car to cross the river, we’re rosy cheeked and smiling– until we smell something…

My youngest has stepped in dog poop.